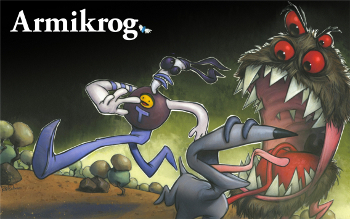 This fortress has been built to protect my family and our ways. These words have been written so that you may know us better. If you are friend, then take shelter, for to you we freely give this place. But we warned, however, if you seek to bring harm to this family, I have already bent my will against you. Though I am a kind and gentle friend, I am an even fiercer, terrifying enemy. If your designs are for harm, I will unleash Meva's wrath upon you. The three engines will ignite and the harbinger will be awakened!
Advertisement:
Enemies, know the name of this fortress and fear it; Armikrog.
—Tvark

Armikrog is a 2015 Point-and-Click Game created by Doug TenNapel with Pencil Test Studios. Funded on Kickstarter for release on PC, Wii U, and Playstation 4. It is a Spiritual Successor to TenNapel's earlier games The Neverhood and Skullmonkeys.

The game follows interstellar explorer Tommynaut and his intelligent dog Beak Beak. Searching for a rare element called P-tonium to save the planet Ixen, the two are flying in outer space when suddenly they hit a meteor, causing them to crash. Soon after they crash, Tommynaut and Beak beak find themselves in a bizarre Death World, where they are locked up in a fortress called Armikrog. From there, they must escape the fortress by putting their heads together to solve the puzzles inside.

Vognaut has kidnapped P and intends to drain her mystical energy, while not caring that the process would kill her.

Vognaut has kidnapped P and intends to drain her mystical energy, while not caring that the process would kill her.