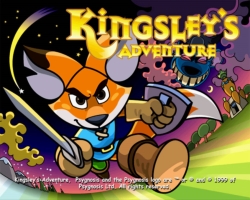 He's gonna fox them up.

Kingsley's Adventure is a cutesy action-platformer developed and released by Psygnosis for the PlayStation in 1999. Its plot centers around Kingsley, a vulpine "Apprentice True Knight" adopted by a royal pair of rabbits who sets out to protect the Fruit Kingdom from Bad Custard and retrieve the Queen's stolen book of magics. On his quest, Kingsley finds himself having to free several fellow True Knights from Bad Custard's thrall.

Essentially a colorful platformer that plays a bit like Crash Bandicoot and The Legend of Zelda. It's garnered a cult following for its endearing characters and settings.

used to be up for many years after game's release, and contained some developer commentary and Back Story.