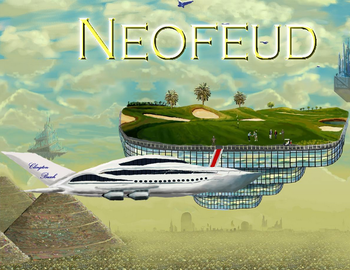 Neofeud is a Point-and-Click Game, released on PC through Steam on 19th of September, 2017. It was developed by Silver Spook Games, but this really stands for one man, Hawaii's Christian Miller, who has done nearly everything in the game, to the point of voicing the protagonist (though not the other characters).
Advertisement:

It is set in 2033, in a Cyberpunk future where the hyper-rich elite of the US society became completely insulated from the public opinion (in part due to literally living a world away from them inside their floating cities) and adopted the habits of the pre-revolution French aristocracy, with extremely similar dress sense, etc. and literally calling each other Neofeudals, while also being served by the robotic butlers.

In fact, there's been such an explosive growth in the number of both sentient and near-sentient machines and of the heavily gene-spliced individuals that a "Sentients" category had to be formed for them, so that social services could better deal with the large number of poorly adapted, often unemployable creations. The protagonist, Karl Carbon, is just one of these social workers. Of course, a chance altercation with a (near)-Sentient Machine soon clues him in on a powerful conspiracy amongst the Neofeudals...