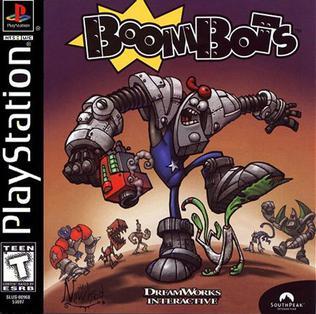 Our hero, ladies and gentlemen.

BoomBots is a Fighting Game released in 1999 for PlayStation and published by SouthPeak Games. It was created by Doug TenNapel, best known as the creator of Earthworm Jim, and was the third and final game developed by his The Neverhood studio. Like The Neverhood and Skullmonkeys, BoomBots features distinctive Claymation visuals and various amounts of Toilet Humor. The big difference here is that the graphics are rendered in 3D. The only connection to The Neverhood is an unlockable stage there and if you win, you can play as Klaymen.

In the much too distant future, 15,000,000,000 A.D., alien cats have kidnaped all of the Earth's house cats! Fortunately, the brilliant American scientist Dr. Pick has built an array of robots to retrieve them at the alien cat planet. Those pesky alien cats aren't gonna make things easy for our band of bots as they have their own BoomBots waiting to attack at every corner. Now it's up to your BoomBot, or Klaymen, to fight your way through victory.