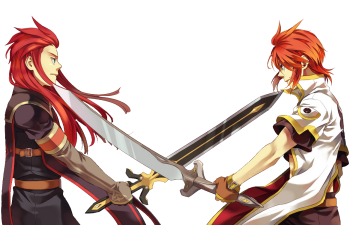 A man and his REPLICAAAAAAAA!
Fan-art by miho

There are clues a creator can apply to a pair of characters to indicate that that they are opposites in some way. One of those is to give the characters opposite handedness, making them more than just metaphorically mirror images.

Expect to see tropes like Evil Counterpart, Evil Knockoff, Cain and Abel, Polar Opposite Twins, The Lancer, or The Rival and Rival Turned Evil. Also expect to see a lot of parallels in their respective characters and stories - they are as much alike as they are opposites. Commonly, they will represent what the other could have become, had they made different choices or had slightly different luck.

Most often, the character with the left hand will be the evil one, or at least less of a hero than the right-handed character.

See Southpaw Advantage for when being left-handed is advantageous. Often overlaps with A Sinister Clue, in which left-handedness is visual shorthand for being evil.

Compare Hair-Contrast Duo, where another physical characteristic is used to symbolize the contrast between characters. Not to be confused with Ambidextrous Sprite or Mirror Character.