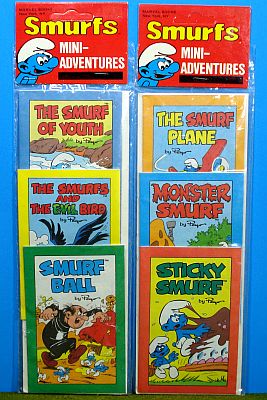 Their creator Pierre "Peyo" Culliford wanted these humanoid little blue elves be mysterious by having them shadow Johan and Pirlouit, I mean, Peewit throughout the tale’s beginning by showing their shrouded eyes in some panels or a five fingered blue hand reaching out from behind some leaves in another. It wasn’t until wizard Homnibus sends both knight and his squire to the Cursed Land where the Smurfs live via “hypnokinesis” are we introduced to said creatures.

Just like introducing troublesome Peewit which proved to be an excellent contrast to somber and serious Johan before them, the Smurfs were a huge success delivered in a small package where popular demands had them appearing in the next Johan and Peewit adventure called "La Guerre des sept fontaines," "War of the Seven Springs" in English, published in 1959.

Recently made Editor-in-Chief Yvan Delporte recognized the diminutive stature of the Smurfs made them perfect stars to fit in the mini-récits (short stories) that gave readers fully contained forty-eight page story in a postcard sized comic in the pages of Spirou. After Spirou publisher Charles Dupuis approached Peyo with the idea, Peyo agreed and, on the condition Delporte helped him write the comic, the Smurfs' first comic “Les Schtroumpfs noirs” was introduced the same year, the story helping establish the basic setting and some of the original characters that would become the staples of the series.note Not only did it introduce Delporte’s role as a collaborator in the creative process, but Peyo had ultimate control of the storylines and characters whilst Delporte helped develop the particulars of the plots and write the dialogue before Peyo committed the final script to paper.

By 1963, The Smurfs graduated from supplementary mini-comics to the prestigious pages of Spirou. Starting with “Le Schtroumpf Volant,” which is “The Smurfnapper” in English, the Smurfs’ adventures expanded from postcard sized mini-récits to the more traditional A4 single-fold-sized comics roughly 8.5X11 inches found in the page of Spirou magazines. Meaning since the size of the pages increased, more panels could fit on a page, reducing the page count for each individual story, so more stories were required to fill each individual book, eventually the pages expanded to forty. As with Johan and Peewit, the adventures became serialized over a string of weekly issues. Having the longer format meant character development along with emergence of numerous Smurfs from what been relative anonymity in the blue masses of identical Smurfs.

Not only did the first book “Les Schtroumpfs noirs” feature three tales but story “Le Voleur des Schtroumpfs” introduces villainous Gargamel and his cat Azrael, making them the Smurfs’ main and only adversary. It wasn’t until 1966 another character was introduced: la Schtroumpfette, though she won’t officially become a main character until later on. Despite Bigmouth’s only sole appearance in “La Soupe aux Schtroumpfs” (“Smurf Soup” in English), other new characters won’t be introduced until “Le Bébé Schtroumpf,“ where Baby Smurf becomes an official main comic book character in 1984. Four years later saw the introduction of the Smurflings (Nat, Snappy, Slouchy and Sassette) in “Les P'tits Schtroumpfs.”

“Le Schtroumpf Financier”, “The Finance Smurf” in English, was the last album published on the first of January by the Smurfs’ creator as Pierre “Peyo” Culliford died of cardiac arrest on Christmas Eve 1992. Despite the loss of the Smurfs’ true Papa Smurf, the Smurfs continued to live on thanks in large part to the Culliford family’s efforts. While International Merchandizing, Promotion & Services — a company founded in 1984 by Peyo’s daughter Véronique Culliford — continues to license the property throughout the world, Peyo’s son Thierry Culliford continues his father’s work by continuing having the Smurfs appear in new comics produced by Cartoon Creations, formally called Peyo Studios and distributed by Le Lombard with other artists drawing the characters.