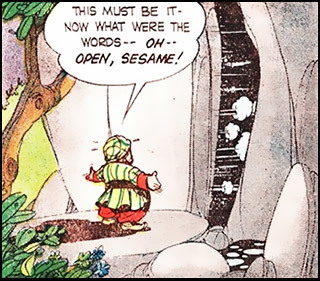 .
"Sesame is a word that opens a lot of doors where I come from."
— Kippi ben Kippod, Rechov Sumsum
Advertisement:

A door or area is secured by a lock that uses a sound to open the lock, including a spoken phrase.

The fact that it sounds an awful lot like "Open Says-A-Me" is a coincidence: the phrase is directly translated from Arabic "Iftaḥ yā Simsim", and the pun doesn't work. The use of "Sesame" ("Simsim" in Arabic) just happens to be a random word, which makes sense; why would you make the magic words to a secret chamber of riches something which anyone could figure out? note While in-universe the password seems randomly chosen, "sesame" was probably used by Real Life oral-tradition storytellers because of a certain cultural understanding regarding the sesame seed, which grows in a seed pod that splits open when mature, possibly giving it a passing resemblance to female genitalia; but also possibly due to a Hebrew word or phrase pronounced like "sem" or "shem" and referencing the name of God or heaven. Either thing would be hidden, protected, and treasured, and thus a reference implies the keeping of secrets and treasures. By using a colorful or well-known metaphor that implies the intended meaning (this sort of thing is known as a "kenning" among Germanic peoples), one can hopefully bypass (some) censors and improve memory retention of the story's details, useful things for traditional storytellers.

Of course, the story is too familiar these days for it to be used as a password in a serious sense, making the phrase something of a Dead Horse Trope, only Played for Laughs.

For musical passwords, see Songs in the Key of Lock. Don't confuse with Speak Friend and Enter, which is when a seemingly complex puzzle has a simple solution.

Patrick: Well, I've done all I can do.

Hooty asks for a password but Eda doesn't care.

Hooty asks for a password but Eda doesn't care.