Webcomic / Erika and the Princes in Distress 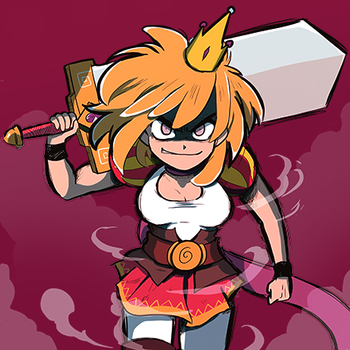 "Who the hell is that... Brute?"
"Just because we've always done things a certain way doesn't mean we shouldn't challenge that. I don't plan on mindlessly following tradition like a sheep. I will not let myself be pushed around by the pressure of social norms I cannot stand and I well intend to live on my own terms!"
— Erika
Advertisement:

Erika and the Princes in Distress is a currently-ongoing French Fantasy Webcomic written and drawn by Yatuu. The first page was posted on Yatuu's blog on April 2017, following a series of six strips that teased the project by giving some backstory on its production.

The story revolves around Princess Erika, heir to the throne of the Kingdom of Brutes where strength is valued above all. Upon learning that she will not be allowed to become Queen unless she gets married, she rejects the idea altogether and goes to confront her mother. As the two argue, the Queen's counselor offers an alternative: the law states that should the Princess refuse to get married, she can instead ascend to the throne by accomplishing a quest; and it just so happens that requests have been piling up from other kingdoms requesting assistance to rescue their respective Princes. Thus Erika, joined by her Lethal Chef squire Pita and a Neat Freak horse named Bucephalus, departs on a journey from kingdom to kingdom to prove her worth.

One of the main goals of the comic is to act as a Deconstruction of gendered tropes and stereotypes, notably by inverting traditional gender roles, with the most obvious being the titular Princes in Distress being rescued by a princess. The world in general widely assumes that Women Are Tough and Men Are Delicate, and feminist themes of oppression and sexual harassment are treated through an effective exploitation of Double Standards. As it happens, the motivations of many characters revolve around them trying to break free of the social expectations put on them.

The webcomic is available in French on Yatuu's blog

, and later received an English translation on Webtoon

, which was later published in English

The series is also currently being adapted into an audio play