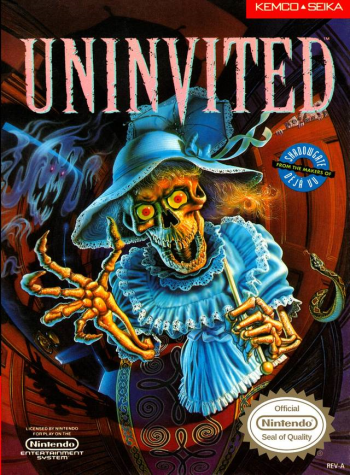 A 1986 Adventure Game which is the second game in the MacVenture series by ICOM Simulations for Apple Macintosh, later ported to the NES among other systems. Known for its Nightmare Fuel involving The Many Deaths of You.
Advertisement:

The setting is a remote, sinister mansion, into which you and your sibling note a younger brother or older sister, depending on the port stumble after escaping the wreck of your car. Satanic rites have turned the home into a magnet for occult evil, and you'll need to exorcise the heart of that evil before it takes root in one or both of your minds.

Or you could just call a tow truck. What's that, your sibling went looking for a telephone and never came back? Well. Guess you're on your own, then.

The game was also included as part of a Compilation Rerelease titled 8-bit Adventures: Volume 1 for Playstation 4 on Oct. 31, 2017.

You reach the end of the page

. Finding indexes, you continue to click and click, forgetting time. Soon, you realize that you have missed an important appointment, which causes you to lose your job, your love, and everything. Your life is in ruins, all because of your addiction to this site.
Your quest is over.note I've got you...