Series / Legends of the Hidden Temple 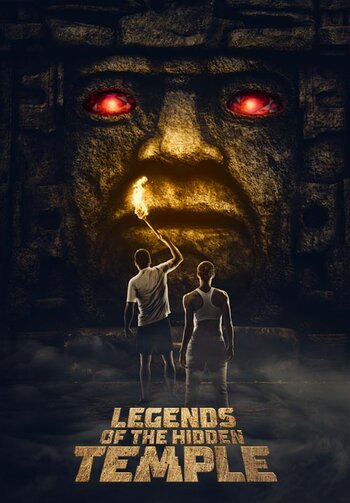 "The choices are yours, and yours alone."
— Olmec before The Temple Run.
Advertisement:

Long ago, in the distant era of the 1990s, a children's television network with studios in Orlando (at the time) was starting to rise in popularity. They created and promoted many programs in multiple media, from Live-Action TV to Western Animation. During this time, they decided to seize the popularity of the Game Show — television programs where individuals or groups participated for currency or grand items. The network created a world where the boundary between video games and reality vanished and a studio where insanity came in the form of green goop and obstacle courses. But it was not enough...

They decided to hire a glorious and adventurous man to take charge of their next project, known by mortals as Kirk Fogg. The set was then created from various props and endless construction, proudly showing off its Temple of Doom theme. A duo of producers, Scott Stone and David Stanley, known for their own counterpart to the green goop in the form of a house, and a wacky, 2-story shopping center came onboard the project. Finally, the rules were written after endless brainstorming, allowing six pairs of children to go through treacherous pits, climb high walls, and venture into a dangerous and difficult tomb which includes the King's Storeroom, the Observatory, and the Shrine of the Silver Monkey... I, Olmec, stand before this creation, spouting my vast knowledge of mystic legends and guiding the players for their rewards.

Now this area where literary devices found in various media are recorded has chosen this program. It is up to you to find those devices that fit, using your memory and research skills. The choices are yours, and yours alone!

It also seems that my legend was made into a movie for the small screen 21 years after the closure of my original tales and challenges. This one expands on my backstory of my people and I and the brave escapades of three youths who venture into my temple and brave its dangers to restore my kingdom and save it from one of my treacherous sons. It premiered on the day of Thanksgiving in the sixth year of the 2010's. A year later, Kirk Fogg and I appeared in animated form in a special crossover episode of The Loud House. 8 years after that crossover, it was announced that adults who had grown up hearing the legends would get a chance to attempt to make their way through the temple in a reboot exclusive to Quibi. After the service shut down in December 2020, The CW took on reins for the reboot. It premiered in October 2021 with Cristela Alonzo hosting. Sadly, the Temple Gates were closed on the reboot after just one season of 13 episodes.

The format of Legends is as follows:

You accept? Then onward to the Chamber of Tropes!