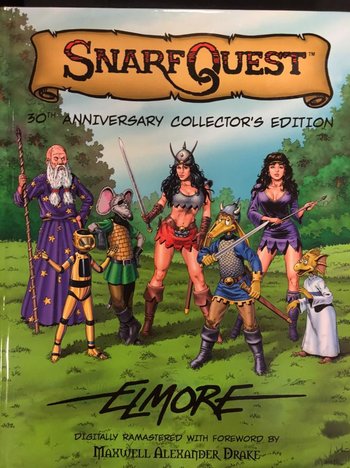 SnarfQuest, drawn and written by Larry Elmore, is a fantasy comic strip with sci-fi and modern elements. It is the only comic series by Elmore, who is more widely known for his fantasy art paintings. The strip was originally serialized from 1985–1989 in the role-playing magazine Dragon, and, due to its popularity, subsequently spawned several collected volumes, tabletop games, and full-color followups by Elmore in 2000 and 2011.

The eponymous Snarf is a male zeetvah—a humanoid being with long, batwing-like ears, and a dragonlike snout. Like all zeetvahs, Snarf comes from the village of Zeetville, located in the Vallys [sic] of Exotic Beings. Snarf is an adventurer of the comic-hero variety. More clever and opportunistic than brave or heroic, Snarf displays a certain "courage under pressure" and is usually able to talk or bluff his way through danger. His basic goals are to become rich and famous; however, he would rather steal treasure than directly fight for it.

Initially setting off a quest to become leader of village, Snarf gets sidetracked after encountering Aveeare; an explorer robot from space whom Snarf mistakes for an armored wizard. Over the cross of his adventures, Snarf gains a variety of allies, such as the beautiful swordswoman Telerie Windyarm; Prince Raffendorf, a human transformed into a humanoid rat; and Willy, the dragon who thinks he's a duck. He also gains enemies, primary among them being the Evil Sorcerer Suthaze, and his apprentice Geezel.

A card game based on the strip called SnarfQuest Card Game was released in 2001.

SnarfQuest RPG Worldbook was released in 2003 containing information on the setting and information for roleplaying.

A Point-and-Click Game called SnarfQuest Tales was funded through Kickstarter and the first episode was released in 2017.