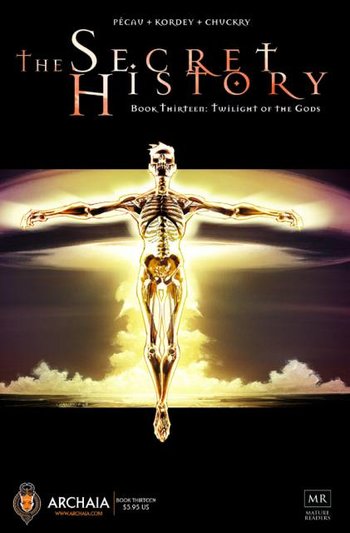 The Secret History is a French Comic Book written by Jean-Pierre Pécau and illustrated by a number of artists, but mostly Igor Kordey. It tells the story of four immortal siblings, two brothers and two sisters, who use their superhuman intellect and superpowered runestones to affect world events throughout history. The brothers are Erlin and Dyo, the sisters Reka and Aker. All four are known collectively as the Archons. Erlin is more or less always heroic, Dyo is always evil and has a particular hatred for Jews, Aker is usually heroic but sometimes not, and Reka does a few Heel Face Turns, as if she's suffering from immortal PMS. The Fifth Archon, William de Lecce, appears later on in history after the Holy Roman Emperor Henry VI castrated and blinded him in 1194. This somehow caused him to gain mystical powers, and also twisted his psyche into something monstrously evil. William also hates the Jewish People.

The narrative follows the Archons through history from receiving the runestones in 3000 BC all the way to the end of World War II. The most time is spent on World War II, with the entire second volume set during that conflict.

Two omnibus editions have been released in English for the United States market, published by Archaia Entertainment.