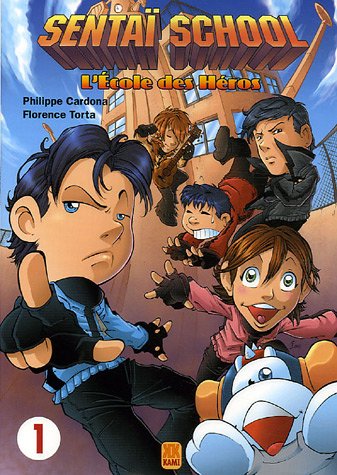 Sentai School: L'École des Héros; literally The Hero School.
"Bad is good!"
"Sentai School: no teacher's strike, no holidays, no vacations. Because in Sentai School, superheroes are in training; real old-school heroes. So if you wanna come, you'd better have one hell of a resumé and an introduction letter, and beware if you're dead last."
Advertisement:

It's about a Japanese Superhero School where the students/ heroes are sentai or shonen. At first a boys school, it becomes coeducational in volume 2, introducing magical girls or Action Girl. The story is an Affectionate Parody of manga, especially sentai and others well known in France. Nearly every character is a spoof of famous manga characters: For instance, Oscar-sensei the costume teacher looks like the real Oscar, The Rose of Versailles heroine. There are two poor and starved children, named Remi and Sarah, that spoof heroes from Sans Famille and A Little Princess animated series among others. Moreover, savvy readers will notice Shout Outs to monsters that look like Doraemon or Mike Wazowski, and bit players like Maetel from Galaxy Express 999 in an airport.

Although the series was thought to have ended in 2008 with 5 volumes, it was revived thanks to a crowdfunding campaign and a 6th volume came out in July 2017. It features much of the same humor, but with updated references, as our heroes and villains struggle against more modern trends or heroism and villainy that made their style outdated.

The main characters are a group of five persons: