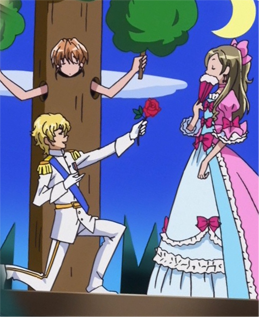 Trees: probably the most difficult of roles in the history of theater.
Slim: What's the point of going out there? They'll only laugh at me.
P.T. Flea: That's because you're a CLOWN!
Slim: No, it's because I'm a PROP! You always cast me as the broom! The pole! The stick! A splinter!
P.T. Flea: You're a walking stick. IT'S FUNNY! NOW GO!
Slim: You parasite.
— A Bug's Life
Advertisement:

A character performs in a play as an inanimate object. It's often used to undermine a character, making them The Chew Toy of the moment. Sometimes they'll get One-Line Anxiety anyway, demonstrating them to be very strange or delusional. The need to have actors essentially playing props can be justified for School Play productions in which everyone in a class needs to have something to do, and the adults in charge are forced to stretch the definitions of "actor" and "character".

See also The Living Dead, when an actor gets the non-speaking role of a corpse. Actors' tendency to inopportunely get the giggles while playing such roles gave rise to the term Corpsing.

Not to Be Confused with actually becoming a tree or disguising as one.

Some of the students, including Judy, are made to play stools in the play.

Some of the students, including Judy, are made to play stools in the play.