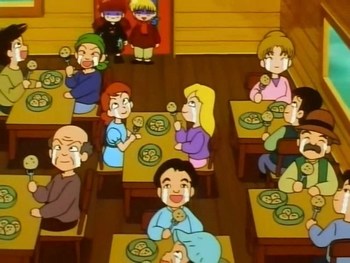 The potatoes were apparently so good that their taste alone will make you cry, whether you like it or not.
"What was the fruit like? Unfortunately, no one can describe a taste. All I can say is that, compared with those fruits, the freshest grapefruit you've ever eaten was dull, and the juiciest orange was dry, and the most melting pear was hard and woody, and the sweetest wild strawberry was sour. And there were no seeds or stones, and no wasps. If you had once eaten that fruit, all the nicest things in this world would taste like medicines after it. But I can't describe it. You can't find out what it is like unless you can get to that country and taste it for yourself."
— The Last Battle by C. S. Lewis
Advertisement:

Generally takes two forms: Either it's a food that's some combination of ridiculous ingredients, known for their yumminess, or its exact composition is never described, only vague flavor. (It will also often be in terms of other foods well-known for tasting good.) But that description is enough for us to form our own opinions. Sometimes the food is actually stated to be magical or godlike. A Trademark Favorite Food may also be treated in this fashion.

Just watch out. Some of these foods are so good, they're addictive in very, very bad ways. Women who are pregnant, could be pregnant, or are nursing should not eat Impossibly Delicious Food. May Contain Evil.

No Real Life Examples, Please! After all, what may be impossibly delicious for one Troper may be stomach churning for another.

An injured Cricket and Tilly have a taste of Gramma's homemade biscuits and are instantly infatuated with them.

An injured Cricket and Tilly have a taste of Gramma's homemade biscuits and are instantly infatuated with them.