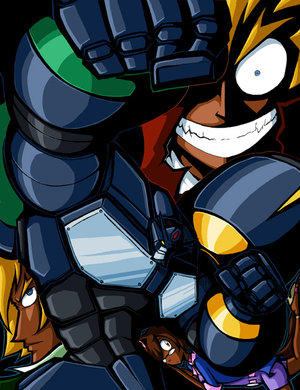 Atomic King Daidogan is... well... it's... Let's just let the author's description of Volume 1 speak for itself, shall we?

It is the glorious FUTURE...

...and no city better exemplifies why the future is AWESOME than Neo-Tokyo, Capital of Business! Here, brilliant and shrewd businessmen combat one another for corporate supremacy, not with boring negotiations, but with EPIC GIANT ROBOT BATTLES! Sounds great, right? Ha ha! NO. Not if you're BROKE.

Our hero, restaurateur Goto Onishi, is totally destitute. His late father left him in charge of the family ramen house, and despite Goto's lofty dreams and burning fighting spirit of JUSTICE, he has next to no business sense and is running the place into the ground. As if this weren't bad enough, Goto has to constantly defend his business, nay, his very MANHOOD, from the barbs and slander of his arch-rival Pimp King Oboe and his deadly robot: DYNOMITE DX!

But...! Goto's father may have left him with more than just a restaurant. What hidden (giant robot) secret power (giant robot) lurks beneath the floorboards (giant robot)? Will Goto be able to defeat the Pimp King? Who exactly WAS Goto's father? And who's this mystery dude who pretty much looks exactly like Goto except he's taller and stuff?! Three of these four questions will be answered within! Prepare you now... for ATOMIC KING DAIDOGAN!!

Atomic King Daidogan is an American-made manga, penned by one Nathan Maurer, better known on DeviantArt as captainosaka, and as you can see, it's a lovely example of the Affectionate Parody. Nobody takes the events of the story seriously, except for the ridiculously Hot-Blooded and over-the-top hero, who reads like the most basic traits of Shōnen heroes cranked Up to Eleven and mashed into one guy.

The first chapter of the manga won fist place in one of Tokyopop's Rising Stars of Manga books, and had its first volume published through Tokyopop in 2006, in a very limited release. Sadly, once the first stock of Volume 1 was sold out, that was it. There are currently no plans for a Volume 2 or for Tokyopop to redistribute Volume 1...in print. You can get volume 1 digitally through Comixology

. However, the author certainly hasn't stopped making comics. The author's DeviantArt account can be found here

. His most recent project, the Gurren Lagann webcomic/80s buddy cop movie parody DOUBLE K can also be found through said deviantArt account. And if you're wondering if it's even more off-the-wall than Atomic King Daidogan? OH HELL YES.

Tropes are to exhibit in Atomic King Daidogan: