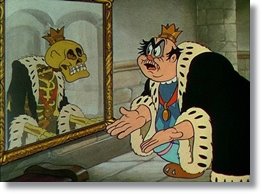 "Is the richest king in all the world to starve to death?"
"Give me gold, not advice!"
Advertisement:

"The Golden Touch" is a 1935 Silly Symphonies short directed by Walt Disney, and was the last cartoon he ever directed, for reasons explained below.

The plot is similar to the original King Midas story from Greek Mythology, albeit updating it from Ancient Greece to the times of Medieval Europe, obviously to keep in vogue with the fairy tale settings of the Silly Symphonies. The short begins with King Midas bragging and singing about his vast riches, which prompts a smug little elf called Goldie to appear and give him the Golden Touch, albeit with warnings that Midas ignores. Initially, Midas is thrilled at his newfound gift, but quickly discovers its side effects when he discovers that it turns whatever he eats or drinks into gold, prompting a Villainous Breakdown and him surrendering his power, kingdom, and riches for something to eat.

The short is notable if just for the scorn it received from Walt himself. Apparently, during the making of Snow White, Walt realized that it had been years since he had last directed a short cartoon, and decided to try it again with this cartoon to see whether he was good enough to direct Snow White himself, working on the project in secrecy with only two animators, Fred Moore and Norm Ferguson. Unfortunately, upon release, "The Golden Touch" was an immediate flop. Reasons included that the short was stiff and lethargically paced and that Midas came off as too one-dimensional and too unsympathetic for audiences to care about him. As such, Walt immediately disowned the cartoon and forbade anybody from ever bringing it up around the studio. This failure was also so hard on him that he gave up directing cartoons altogether, stepping aside to become a full-time producer.

"The Golden Touch" provides examples of:

Example of:
Blessed with Suck