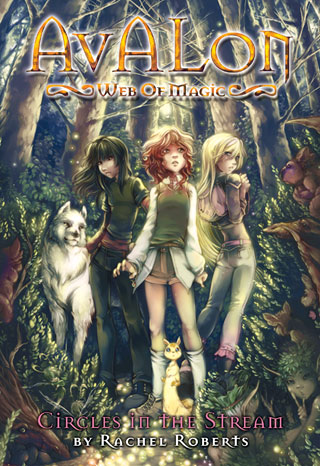 Magic does exist...
Avalon: Web of Magic is a series of children's fantasy novels written by Rachel Roberts, loosely based on the ideas from Princess Gwenevere and the Jewel Riders. The first installment, Circles in the Stream, was originally published in 2001. After its publisher went out of business in 2005, without publishing the last two books, the series was in limbo until Seven Seas Entertainment picked it up in late 2006. Seven Seas republished all twelve books, revised by the author and with new covers and illustrations. The series has also been adapted into a three-volume OEL Manga.
Advertisement:

Three twelve-year-old girls find magic jewels, bond with magical animals, and become mages who must defend Earth and the magical worlds from the power-hungry Dark Sorceress. This boils down to trying to find the lost home of all magic, Avalon, before the Sorceress does.

The first novel is available

as a free audiobook.