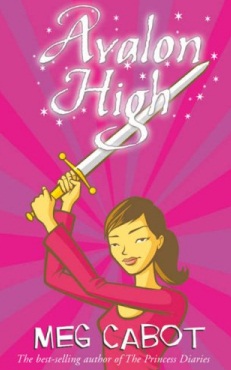 Avalon High is a 2005 novel by Meg Cabot.
Advertisement:

The plot follows Elaine 'Ellie' Harrison, the daughter of two professors who specialize in medieval and Arthurian studies. The family moves to Annapolis, Maryland for a year long sabbatical and Ellie begins High School at Avalon High. There she meets some of the students like Lance the jock, Jennifer the cheerleader and Will Wagner, the Big Man on Campus. Ellie begins to bond with Will and gets a crush on him despite him dating Jennifer. Slowly Ellie begins to notice major similarities between the situations at Avalon High to King Arthur legend. Will is Arthur, Jennifer is Guinevere, Lance is Lancelot and Ellie herself is believed to be Elaine, the Lady of Shalott, a woman who committed suicide after falling in love with Lancelot. She is not the only one to know this as it is revealed her teacher Mr. Morton (aka Merlin) and Will's evil step-brother Marco (who is Mordred) are also clued into the legend. Now Ellie must try to help save Will from Marco and the powers of darkness but how can she if she is just the Lady of Shalott?

Despite being based on the Legend of King Arthur, the series isn't altogether faithful to its source. Many things had to be Bowdlerized or taken out to fit the story in the American high school setting.

Disney Channel has put out a Made-for-TV Movie version.

Not to be confused with Josh Phillips's 1999 webcomic Avalon.