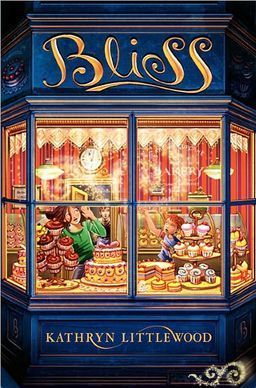 "Your mother and I call this place the "Library", even though there's only one book here. This book is more important than all of the books of the country. So, we really have a library"

Rosemary Bliss and her siblings are descendants of the ancient Bliss family. Their family's cookbook, called the "Bliss Cookery Booke" contains magical recipes, and the baked goods sold in the family bakery improve the life in their hometown in subtle yet mysterious ways.

Disaster strikes when the parents have to leave the town for an extended period of time and Lily, a distant relatives of the Bliss family, who know about the "Booke" and want to have it for her Evil Organisation, "Perforated Ladle", comes to visit them.

The Bliss Bakery series follows Rosemary's (mis)adventures in trying to protect the book and its (somewhat dangerous) contents from the claws of evil relatives and, of course, the big industry. It consists, by far, of three book: