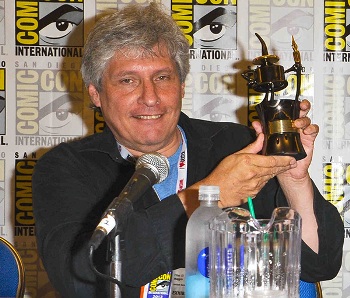 Maggin with the Inkpot Award he won at the 2013 Comic Con.
Advertisement:

Elliot S! Maggin (born 1950) was the lead writer of the Superman comics during The Bronze Age of Comic Books. He also wrote two original Superman novels, Last Son of Krypton and Miracle Monday, as well as the novelisation of Kingdom Come.

One of his earliest and best-known comic book stories is "Must There Be A Superman?", in which the Guardians of the Universe take Superman aside and suggest to him that his readiness to help everybody may be doing harm as well as good, by letting people get into a habit of relying on him to do things they could and should do themselves.

The idiosyncratic punctuation of his middle initial has its origins in the days when comic books habitually used exclamation marks at the end of every sentence. After typing out an entire script full of exclamation points replacing periods, he did the same to his own name out of force of habit, and (with a bit of prodding from editor Julius Schwartz) it stuck.

Works that Elliot S! Maggin wrote or contributed to with their own trope pages include:

Other works by Elliot S! Maggin provide examples of: