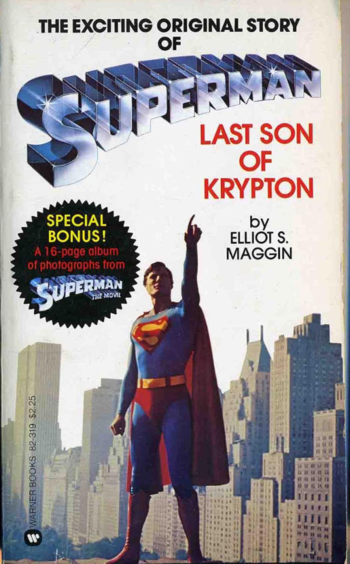 An alien named The Master plots to take over the galaxy, and Superman must join forces with his worst enemy and childhood friend Lex Luthor to stop him.

A 1970s Superman novel by Elliot S! Maggin. It was originally proposed as the idea for a Superman movie, and the novel was released as a companion to the first Superman movie - although the plot and characterization (especially that of Luthor) differ greatly from the movie. (Even the location of Krypton is different; in the movie, Superman claims he comes from another galaxy, while in this novel Krypton is said to have orbited Antares.)

As this novel was written prior to Crisis on Infinite Earths, Superman's powers reach near-ridiculous levels at some points. He flies through the core of the sun to take a refreshing bath. He fires a blast of air between his front teeth that disables a helicopter several blocks away, yet doesn't even affect anything else nearby. He takes out an entire mob of Lex Luthor's goons, one man at a time and in a different and inventively nonlethal way with each man, before a ten-second countdown finishes. It doesn't quite reach the truly insane levels shown in some episodes of the Super Friends ("With Colossus distracted, I'll pick the Earth out of his pocket and put it back in orbit around the sun"), but it comes close.

The book can be read online here