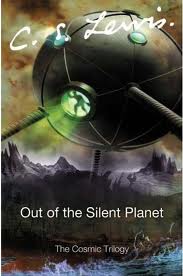 "The idea of other planets exercised upon me then a peculiar, heady attraction, which was quite different from any other of my literary interests. Most emphatically it was not the romantic spell of Das Ferne. "Joy" (in my technical sense) never darted from Mars or the Moon. ... I may add that my own planetary romances have been not so much the gratification of that fierce curiosity as its exorcism. The exorcism worked by reconciling it with, or subjecting it to, the other, the more elusive, and the genuinely imaginative, impulse."
— C. S. Lewis, Surprised By Joy
Advertisement:

Everybody and their dog knows about Narnia, and has probably read it. They also probably know about the likes of Mere Christianity or The Screwtape Letters. But if you ask them whether they realized that C. S. Lewis wrote science fiction, they'll look at you like you're from another planet. The Space Trilogy is the unofficial name of his series of Planetary Romance and Fantasy novels, mixing space travel with Medieval cosmology and Christian theology.

The trilogy chronicles the adventures of Dr. Elwin Ransom, an Oxbridge philologist who finds himself caught up in a space-travel experiment that turns out to be part of a cosmic battle between good and evil spiritual forces. Each volume is a stand-alone story, although they have a shared continuity and an elaborate universe.

There is also an unfinished novel titled The Dark Tower (not to be confused with the Stephen King series of the same name) originally intended as a sequel to Out Of The Silent Planet, and abandoned in favor of Perelandra. The plot, in which Ransom was only a secondary character, involved an Alternate Universe rather than space travel. Walter Hooper, the executor of Lewis' literary estate, published the fragment posthumously. The scholar Kathryn Lindskoog challenged the authenticity of The Dark Tower, and accused Hooper of forging it—though this seems to be the minority view among scholars of Lewis.

The Space Trilogy as a whole provides examples of: note See individual books' pages for tropes specific to those works