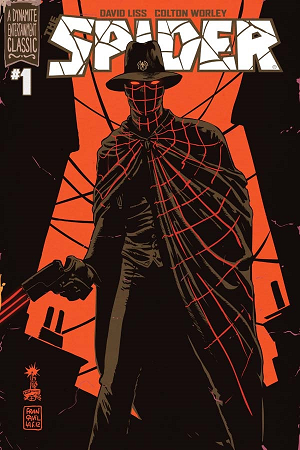 The Spider was created as a Follow the Leader of The Shadow when Popular Publications decided to compete head-to-head with Street & Smith with their own solo hero Pulp Magazine. The first story, published in October 1933, was written by R.T.M. Scott. In it, Richard Wentworth used the false identity of "the Spider" to cover his ruthless vigilante activities. When introduced, the Spider is already notorious as a killer of criminals. He even brands his victims with the mark of the Spider on their foreheads, so no one else will be blamed for the deaths.

Starting with the third story, "Wings of the Black Death," The Spider was usually written by Norvell Page under the "house name" of Grant Stockbridge. Page pumped up the action and scale of the stories. Richard Wentworth now was the Spider, the criminals he fought were larger than life, and the stories were charged with emotion. Already a Master of Disguise, the Spider soon added a particulary fearsome appearance to his bag of tricks, making himself appear to be a hunchback with a sharp nose and vampiric fangs.

The Spider's love interest and primary sidekick was Nita Van Sloane, his fiancee. While not quite up to modern Action Girl standards, Nita was no shrinking violet, but a dead shot, and quite capable of impersonating the Spider in times of need.

Wentworth's bodyguard was Ram Singh, a Proud Warrior Race Guy (initially Hindu, later Sikh) who served the Spider out of personal admiration. Also helping the Spider were his chauffeur Ronald Jackson (who'd served under him in World War I), his butler Harold Jenkyns, and Professor Ezra Brownlee, who early on supplied the Spider with many of his gadgets and scientific knowledge.

Police Commissioner Stanley Kirkpatrick was one of Wentworth's closest friends, but also extremely dangerous to him. For if Kirkpatrick ever had definite proof that Wentworth was in fact the Spider, he would have to arrest the man for the many cold-blooded murders he'd committed.

The Spider magazine ran until December 1943. There were also two movie serials (which had the title character in a costume that makes Lee's inspiration more obvious), a Comic Book adaptation by Tim Truman (which had a curious setting update to an alternate version of the 1990s where the League of Nations persisted to recent years), and a recent short story anthology

Dynamite Entertainment publishes The Spider currently, setting it in the current era (aka the mid 2000s).