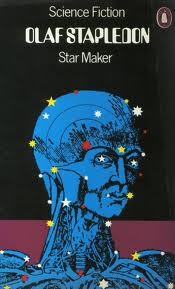 Star Maker is a 1937 Science Fiction novel by Olaf Stapledon, and a sequel of sorts to Last and First Men. When he decided that the former book — which chronicled the entire (future) history of humankind — had not been nearly ambitious enough, Stapledon followed it up with a history of the entire universe, culminating in a brief glimpse into the nature and history of God himself (the titular Star Maker).

Like Last and First Men, the story's viewpoint grows broader and broader as it progresses, though this time it is a broadness not only of time but of space. After examining several individual alien societies in some detail, the book's perspective gradually pulls back from a planetary to a galactic scale, then to a universal scale, and finally to a viewpoint that encompasses the Star Maker himself and all of his various created universes.

Also like its predecessor, it's told through the framing device of a man (Stapledon himself, presumably) being given this "guided tour" of reality telepathically by advanced beings from the future.