Literature / The Star of the Guardians 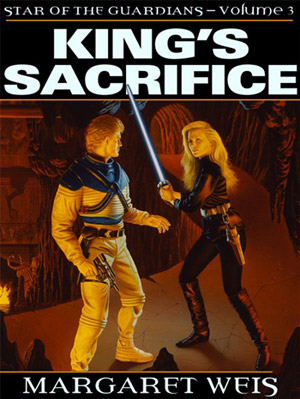 Cover to Volume 3
Two together must walk together the paths of darkness to reach the light.
Advertisement:

An epic Space Opera by Margaret Weis, not as well known as her other works. The first book was published in 1990, the fourth one in 1993. The series consists of four volumes:

Because the series' covers feature Laser Blades prominently, young readers would be forgiven for confusing this with Star Wars. They wouldn't be far wrong. The series starts about 20 years after a college professor and unlikely revolutionary, Peter Robes, led an uprising against the monarchy; the "Blood ," a ruling caste which had been genetically engineered for wisdom, intense charisma and occasional superpowers, were wiped out almost to a man. The lone survivors are a small band of loyalists; the king's nephew, newborn Dion Starfire, whom they managed to escape with; and Warlord Derek Sagan, who helped organize the coup and fought his Star-Crossed Lover Maigrey Morianna to do it. At the beginning of the book, the last of those loyalists, Maigrey's bookish brother Platus, is killed, leaving the now-grown-up Dion to flee with the help of Mendaharin "Tusk" Tusca, halfblood Heroic Bastard son of another of said loyalists. Hunted by now-President Robes and "Citizen-General" Sagan and the People's Republic of Tyranny the new government has become, aided by the rumpled, fatherly General Dixter and enigmatic Not Quite Dead Maigrey, Dion must find a way to come into his birthright and reclaim the throne.

And, of course, there's more to the story than what meets the eye...

The series had a Spin-Off, Mag Force 7, chronicling the adventures of a band of mercenary misfits modeled consciously after The Magnificent Seven.