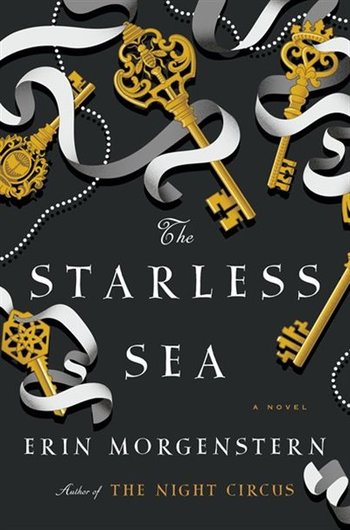 There are three paths. This is one of them.
"Once, very long ago, Time fell in love with Fate."
Advertisement:

The Starless Sea is a romantic fantasy novel by Erin Morgenstern published in 2019. The novel's formatting is unique in that it intersperses the chapters that directly follow the main story with excerpts from in-universe works.

One day, Zachary Ezra Rawlins came across a realistically-painted door in an alleyway behind his mother's fortune-telling shop. Despite feeling an urge to try and open it, the more rational part of him decided it would be safer not to, so as to avoid the disappointment of finding that it was just a really nice painting. The door was gone the next day.

Fourteen years later, Zachary is a grad student at an unidentified university in Vermont studying Emerging Media (focusing on video game design). One day, while exploring the University Library looking for something interesting to read, he comes across an ornately designed but otherwise unmarked book. It has no listed author, but the title page reads Sweet Sorrows. Intrigued, he begins to read it and finds that one of the chapters perfectly narrates the day he discovered the door behind his mother's shop.

Baffled by how this book that's likely older than he is could contain such detail about an incident from his own life, Zachary sets off on an adventure of love, time, and stories that takes him to the Starless Sea, a mystical haven hidden away from the world. But he soon finds himself over his head as the Starless Sea is no longer what it once was, and not everyone wants it found.