No Such Thing as Space Jesus 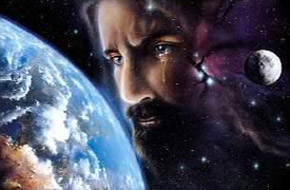 Definitely no such thing. What you're seeing here is a very unusually colored nebula.
"You found me out... I'm not really a god... I'm *cough* *cough* just an ordinary...eternal, omniscient, superintelligent being."
— The Sun God, Futurama: The Game
Advertisement:

Sufficiently Advanced Aliens are very common in sci-fi, and they will often claim to be actual deities. In some cases, they'll be actual, historically worshipped deities like Apollo or Thor.

Unless under some sort of mind control or from a "primitive" culture, the heroes will never treat a Sufficiently Advanced Alien as a deity, or even consider the possibility that they might just be right. Some Earthlings might fall for the "alien", but they will be shown to be weak-minded to be taken in by these "gods".

For something like the Puppeteer Parasite whose "miracles" are born from technological prowess, this is reasonable enough, but for beings like the Q or the Ori or various Eldritch Abominations in fiction, who have immense, unexplainable powers that genuinely seem god-like in nature, it stretches (dis)belief. The only reason they should be considered "just" powerful aliens seems to be "they came from Outer Space", which doesn't really make all that much sense if you think about it - if there is a deity who created everything, and you could physically meet them, why should a divine encounter only happen on Earth? Other views on why such entities are considered aliens instead is also due to the prevalence of Clarke's Third Law and its corollaries in science fiction and real life science, and because the words "god" and "magic" brings up connotations of worship and superstition.

An interesting irony in this is that Heaven is generally regarded as being in, or above, the sky, and that most cultures tend to look upward when thinking about their deity or deities.

There is a strong degree of Arbitrary Skepticism in many examples of the trope, particularly in cases where characters automatically disbelieve the self-proclaimed deity because it runs against their view of what God is or should be. Take, for example, Star Trek V, where "God" tells our protagonists that He "needs a ship," and is met with skepticism on the grounds that God wouldn't need a starship. Sure, the Abrahamic God would have no need for a starship, but Helios had a chariot and Ra had a barge (and The Bible does describe God as possessing a chariot made of angels)... In short, the entity is disbelieved because it pretends to be specifically the Abrahamic (or at least Christian) God. Had he instead claimed to be, say, Quetzalcoatl,

one suspects our heroes' reaction would have been very different.

See also Sufficiently Advanced Alien, Arbitrary Skepticism, and Ancient Astronauts. Not to be confused with If Jesus, Then Aliens which in some ways is almost the reverse. No Such Thing as Wizard Jesus is how Jesus will continue to be worshiped and not suspected of being anything other than the son of God even if an alien superhero named Josys from the planet Beaven is running around doing everything he can do and more. You Mean "Xmas" is when there is "No Such Thing as Space Christmas".

Has nothing to do with Space Jews.

Ironically, there technically is a "Space Jesus,"

however he is a musician and not exactly the Jesus you were probably thinking of.