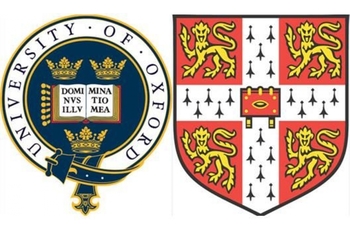 Let the Battle of the Commas Begin!!!
Advertisement:

A portmanteau term for the Universities of Oxford and Cambridge (two distinct institutions). They are the UK's equivalent of (and the basis for) the Ivy Leaguenote Well, two universities within the Russell Group, the actual Great British equivalent. They don't like the term 'Oxbridge', being very loyal to one or the other. And would consider being called "UK's equivalent to the Ivy League" to be an insult. and thus they are popular in UK fiction. They have also inspired fictional universities such as the Unseen University for wizards in the Discworld novels.

The University of Oxford is the first of the two schools to begin teaching, although, like all of the first European Universities, it was never officially founded. As decades and centuries went by, it grew organically as scholars settled in the city and began establishing their own informal institutional ties. Teaching activity is recorded in the city from as early as the late 11th century. In 1209-10 the university was closed down temporarily because two students were hanged for killing a woman. Many scholars fled, and some of them settled in Cambridge, establishing their own University. The University of Cambridge received its official royal charter in 1231.

In entertainment, Cambridge is known for the Cambridge University Footlights Dramatic Club (more commonly just "The Footlights" or "The Cambridge Footlights"), which puts on a yearly comedy revue with many of Britain's best-loved comic writers and actors. When they find that they work well together, some of the participants put assemble comic/acting pairings/groups. Oxford is known for "The Oxford Revue", which has just as prestigious a pedigree. Indeed, most of the Monty Python troupe performed for either one school or the other (Terry Gilliam is the exception, having graduated from Occidental College in Los Angeles).

Both universities are composed of semi-independent colleges, which hired faculties and accept applicants individually. Undergraduate teaching methods are distinct from many others in the UK in using the "tutorial system". In most subjects, rather than a schedule of classes attended by a specific group of students, the university schedules several lectures that any number of students can attend, the colleges assign coursework to the students separately, and at the end of the year, the university holds exams (the grade on the exam pretty much determines whether or not students receive their degree). Most of this college-level teaching is done in tutorials between a faculty member and one or two students at a time, scenes of which will often crop up in Oxbridge-set fiction.

There is a rather fierce rivalry between the two universities, members of each referring to the other as 'The Other Place'. This rivalry is most apparent in Varsity matches, which are any type of competition between the two, most often sporting (e.g. the boat race) but also covering various events such as the annual Tolkien quiz. The 'Town' (non-university) vs 'Gown' (university) divide is also a thing in Oxford and Cambridge, as both Universities essentially run their host cities, something accepted with fluctuating levels of equanimity by the other inhabitants.

Naturally both of them have a Pretentious Latin Motto, though there was nothing pretentious about them when they were chosen—back then, all the students would have been expected to speak Latin because much of the teaching was done in that language. Oxford has Dominus Illuminatio Mea ("The Lord is my Light") and Cambridge has Hinc lucem et pocula sacra (literally, "From here, light and sacred draughts"—draughts being a metaphor for knowledge, but it would also work quite well as a reference to the pubs...).

Oxford in the media:

Cambridge in the media:

Both in the media: