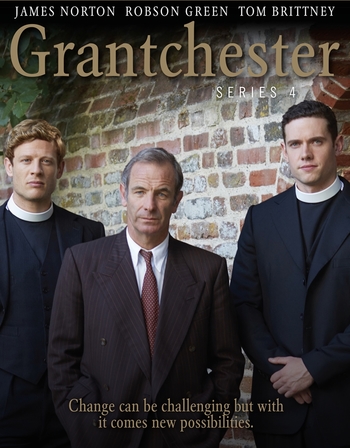 Grantchester is an ITV mystery program that first broadcast in 2014 based on The Grantchester Mysteries stories written by James Runcie. It also airs on PBS in the US.

Sidney Chambers (James Norton) is an Anglican priest in 1950s Britain who, not entirely satisfied with the life of a clergyman, takes up an interest solving mysteries. He teams up with Inspector "Geordie" Keating (Robson Green), who reluctantly accepts Sidney's help at first. The two quickly bond, however, and are soon best of friends. As the series progresses, it begins exploring the characters' complicated personal lives and tracks Sidney's increasing disillusionment with life in the clergy.

Sidney departs in Series 4, having found new purpose in the American Civil Rights Movement. He's replaced by Will Davenport (Tom Brittney), a former inner-city chaplain who's taking up his first post as a parish priest. Will is much more enthusiastic about his calling as a clergyman but, despite his protestations, finds himself drawn into Geordie's criminal investigations.