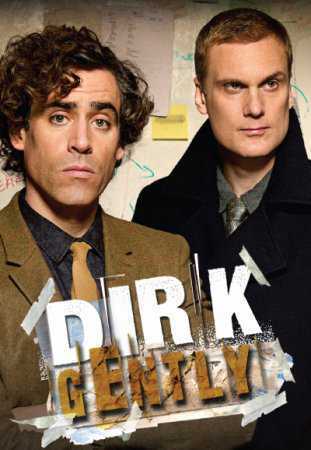 Dirk Gently is a BBC TV series inspired by the Dirk Gently books written by Douglas Adams, adapted for television by Howard Overman. It stars Stephen Mangan as Dirk Gently, an eccentric detective who operates according to a holistic principle he calls 'the fundamental interconnectedness of all things' — namely, that since everything is somehow linked together, then anything he does will bring him closer towards solving the mystery, meaning he can theoretically do anything and solve the case — and get paid for it.
Advertisement:

To most people, this just seems like confidence trickery designed to enable him to bugger around at the client's expense — but he has a strange habit of being proven right...

A television pilot (loosely based on plot elements of the first book) in 2010; a full series of three episodes (notable as BBC4's first ever continuing drama series) aired in March 2012. In May 2012, it was announced that the series was not being recommissioned.

If you're looking for the series that began in 2016, you want here.