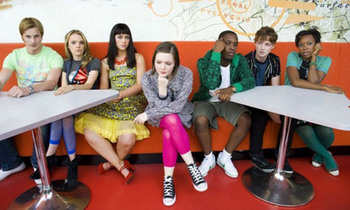 Dis/Connected is a 2008 BBC drama pilot about a group of diverse teenagers studying at the same sixth form college in London who are drawn together when mutual friend Jenny commits suicide. Through the funeral and the aftermath, they begin to form new friendships.

The story jumps back and forth between the day of the funeral and the night of the suicide. It's revealed in the opening scenes that Jenny emailed a suicide note out to her close friends, but they all claim not to have seen it until it was too late to act. It then goes on to show what each of them was doing that night and what prevented them from replying, in the process showing that they each had their own issues. The storylines overlap and intermingle before coming together at the funeral.

The characters include Sophie, who was Jenny's childhood best friend, but left her when she fell in with the popular crowd; Anthony, a lower-class boy who is trying to get out of the violent lifestyle he's been drawn into; Josh, who's having trouble dealing with the death of his mother; Emily, who was experiment with ecstasy for the first time that night; Ben, Jenny's cheating ex-boyfriend; and Paula, a new girl at the college who refuses to talk about her past.

It was never picked up for a full series, which was probably for the best - while effective as a one-off drama it probably wouldn't have stood up for long.