Series / A Discovery of Witches 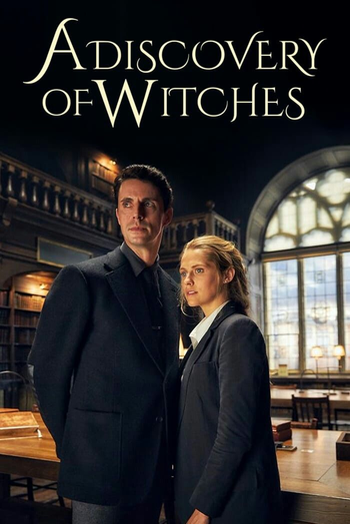 A Discovery of Witches is an Urban Fantasy TV series based on the book of the same name which began airing in 2018, starring Teresa Palmer and Matthew Goode.
Advertisement:

Diana Bishop (Palmer) is an American professor of history from Yale visiting a college at Oxford in the UK. There Diana soon stumbles upon a bewitched book in the Bodleian Library. Herself a witch by birth, Diana has refused to do magic for years, but is forced to face it again because of the secrets this book holds. She receives help from the mysterious vampire and geneticist Matthew Clairmont, in spite of the mutual antagonism between their people. While working together, they strike to uncover the book's secrets and protect it from the threats in the world of magic.

The series had three seasons, covering the events of the three novels in the All Souls trilogy.