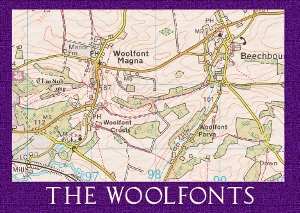 Beneath this placid exterior....
They came 'round a curve between hedgerows, and Fr Paddick caught his breath as the scenery fell away before them: the everlasting downs where Somerset, Dorset, and Wiltshire embraced in grace and gravity […]. "Yes," said the duke, with a proprietary air. "The Woolfonts. Not a bad little district...."
— The Duke of Taunton, to his new rector Fr Noel Paddick SSC, Cross And Poppy
Advertisement:

The ongoing series of novels by GMW Wemyss is a cozy, Slice of Life, Troperiffic saga set primarily in the Arcadian, if always threatened, Barsetshire of The West Country, in Southwestern Wiltshire on its borders with Dorset and Somerset.

In publishing order, the books are:

The series chronicles, in more or less real time, the current lives and doings of the villages, market towns, and hamlets of the district, and their inhabitants (sheep included), often against Ripped from the Headlines backgrounds (floods, referenda, planning issues, and the like). (There are occasional side-jaunts to London, Oxford, ducal holdings in Shropshire, Worcestershire, Cheshire, Perthshire, and the Highlands, and in later volumes to old Lord Mallerstang's beloved Westmorland note Do ''not'' call it "Cumbria" in his or the Duke's hearing, but these are minor.) The villages are "The Woolfonts," Woolfont Magna, Woolfont Crucis, and Woolfont Abbas, with little Woolfont Parva, and the nearby market towns of Beechbourne and Chickmarsh; the wider district includes, as of Evensong, the "Downlands" parishes – sheep country with very small settlements and a Shrunken-not-Deserted-Mediaeval Village. (These are Somerford Mally, Somerford Canons alias Canonicorum; Somerford Tout Saints with Lamsford; Cliff Ambries; Shifford Ombres; Combe Woddley als Waddlycombe; Chalford Mallet; Hawksbourne; Harstbourne Fitzwarren; Harstbourne Sallis; and Harstbourne Fratrum als Friars. And, yes, their history is in their names, and duly explored in the series.) They only look chocolate-box....

The land is (and possibly the great numbers of sheep are), really, The Protagonist and The Hero, and the Backstory of the land to Palaeolithic times is coming out more and more in each volume, and especially now that the In-Universe archaeologists have been let loose on it (a major sub-plot). But there are Loads and Loads of Characters in support: the local nobility and gentry, an entire deanery of the Church Of England (Diocese of Salisbury), the local clergy (Anglican and otherwise, notably including The Vicar, who is a defiance of all the vicarish tropes), shopkeepers, farmers, servants, and those working for the community brewery and community heritage steam railway. And they all get time in the spotlight. (A character sheet is in preparation, but with a Cast-O'-Thousands will naturally take some time.)

Primary characters include the good-hearted but often exasperating and Machiavellian (on the side of the angels) Duke of Taunton (an historian, Fellow of All Souls, former aide to Mrs T, decorated Intelligence Corps officer, and very much a throwback to his Stuart ancestry); his humorless and much-tried sister-in-law Lady Crispin; her aged-but-sharp cousin Lord Mallerstang; the Duke's old right-hander the Nawab of Hublinote The title is Indian. Its holder the Nawab is British Pakistani. There's a reason for that (they were respectively captain and vice-captain in their day of the Eton First Eleven, Oxford Authentics, and OUCC Blues); the perfectly nice and not at all thick ducal nephews and niece, Rupert, James, and Hetty; the ducal servants, led by the imposing Mr Viney, and Rose James the Rectory housekeeper; that old-fashioned painter, the Royal Academician Sir Ben Salmon, and Ben's nephew Lew and Lew's wife Melanie; Sir Thomas Douty; Snook, the most useless sexton in history; Mr Kellow, who runs (with a ham-like fist and No Damned Bar Brawls) the Boar ("A Free House / Real Ale & Cider"); the RC padre in Beechbourne, Mgr Folan; sweet, sexy, widower Fr – nowadays Canon – Paddick and his Good Shepherd curates, at the combined benefice (very High Church and so trad they're under a Flying Bishop); the Bishop, the Archdeacon, and the Dean; the local vet – and his brother, who's Headmaster of the Free School (level pegging with Eton); the tradesmen and farmers; the brewery and railway personnel, led by Noel Paddick's parents and former in-laws (lured down from Wolverhampton by the Duke, naturally, allegedly to run these, in fact to be close to Noel); "Hipsta Chef" Teddy Gates, now a County councillor, and his husband the retired Premier Leaguer Edmond Huskisson, a mouthy, recalcitrant Yorkshireman; Brian "The Breener" Maguire, that Irish-born England cricketer now being charming on Test Match Special and the lecture circuit; The Breener's no-nonsense Welsh wife the Hon. Gwen, who runs the local racing stud; the Nawab's nephew, Sher "Even the Guys Want Him" Mirza, who teaches at the Free School and is one half of a conscientious, conscience-based Chastity Couple with Fr Paddick; and, increasingly, that charming, attractive, wise, and (unadventurous) archaeologist and female don, Millicent, Lady Lacy.

The series as a whole provides examples of: note See individual books' pages for tropes that appear in specific books. Also note that not all spoilers are or really can be marked.

open/close all folders
Tropes A to D
Tropes E to Znote "Zed," of course, this being a Terribly British series.