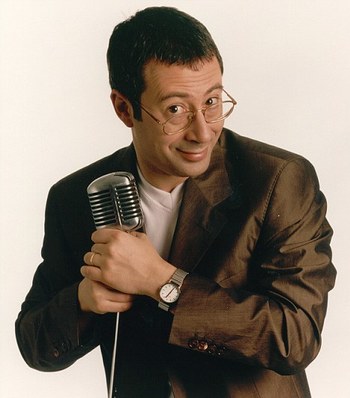 "Comedy will always be central to what I do, it's just an instinct for me, but I am a writer and always have been."
Advertisement:

Benjamin Charles Elton (born 3 May 1959) is an English writer, director and comedian who co-wrote Blackadder (from its second season onward) with Richard Curtis. He also wrote and produced The Thin Blue Line, co-wrote The Young Ones with Rik Mayall and Lise Meyer, and was solo writer on Filthy Rich & Catflap and the now largely-forgotten sketch show Alfresco.

He has also written three West End plays, several "jukebox" musicals including We Will Rock You, and 11 novels.

His published books to date are:

He also had a short-lived comedy show in 1998 on The BBC. The opening

of each show spoofed BBC 1's hot air balloon ident of the time.

In America, he's probably best known for one line from his 2009 novel Meltdown. "'No!' Jimmy protested." The reason the quote became so popular is because One Direction's Louis Tomlinson read it out of a copy of the book on one of the band's web diaries, and it has become a popular joke with Directioners ever since.

As well as his clever use of tropes in the TV series Blackadder and The Thin Blue Line, they can also be found in his novels: