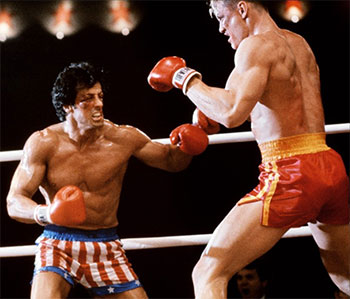 Our story is about a valiant hero, a professional sports/video games/pogosticking champion who is preparing or going to a major tournament for his preferred skill. Normally, these tournaments are contained entirely within the main character's country, as in there are no foreigners competing.

But for this special episode/movie, there is a great threat on the horizon ... there is a foreigner rival who might just be even better than the hero, if not possibly the best in the whole world!

For some reason, this coincidental clash of titans from across the globe always seems to turn into a showdown between the two representative countries. For example: Who is better, America's best player or Japan's best player? It's implied that whoever wins proves that their country is better as a whole, not just at this particular sport.

Used in different mediums for different reasons. Often used patriotically, because the main character lives in your country, and they win! Sometimes used to introduce a new archnemesis and spice up the show's competitors. When the competition is literally an alternative to war between nations, see Make Games, Not War. This is probably a trope because it tends to happen in Real Life.

open/close all folders
Anime and Manga
Comic Books
Film
Literature
Live Action TV
Professional Wrestling
Theatre
Walter Decoursy: It really doesn't matter who comes out on top.
Alexander Molokov: Who gets the chop.
Both: No one's way of life is threatened by a flop... But we're gonna smash their bastard!
Webcomics
Western Animation
Real Life