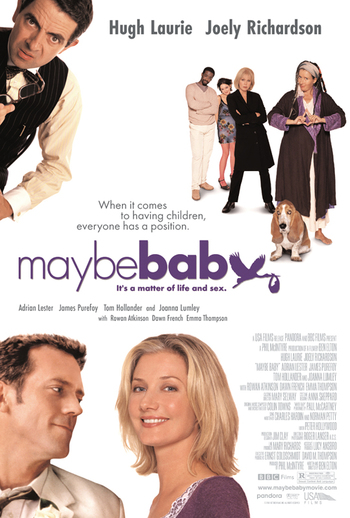 "It's a matter of life and sex."
— Tagline
Advertisement:

Maybe Baby is a 2000 British comedy film written and directed by Ben Elton, adapted from his 1999 novel Inconceivable. It stars Hugh Laurie and Joely Richardson as a couple trying for a baby, with a supporting cast that includes Joanna Lumley, Emma Thompson, Rowan Atkinson, and Dawn French.

Sam Bell (Laurie) is a failing screenwriter married to Lucy (Richardson), a secretary taking a course in William Shakespeare. Sam decides to write what he knows, and he knows infertility. Lucy is against it, but he goes ahead with it anyway. It doesn't end well...