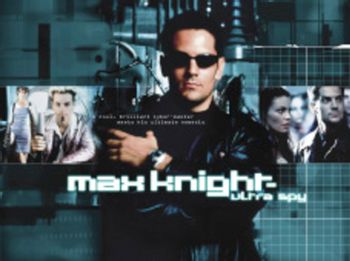 A movie made in 2000 for UPN, Max Knight: Ultra Spy was written by Paul Bales and directed by Colin Budds. It starred Michael Landes as the titular character, and Rachel Blakely as his love interest. It was originally intended as a Backdoor Pilot for a proposed series, but it was never picked up.

In the not-too-distant future, girl genius Lindsay Dailey (Brooke Harmon) has discovered a new element that could solve the world's energy crisis. However, she's shortly kidnapped by the evil Tyler (Anja Coleby) and her boss, the budding Super Villain Zachary Kahn (Christopher Morris), who goes by the alias "DXM", and who wants to use her new discovery to power his evil plot. Lindsay's older sister Ricky (Rachel Blakely) has no choice but to reach out to the super spy Max Knight for help rescuing her.

Meanwhile, Max (Michael Landes) is busy stealing back a stolen experimental microchip. His paths cross with Ricky when he learns that the man behind the theft was the same DXM who kidnapped Lindsay. He agrees to help her — not the least because he falls in love with Ricky at first sight.

Widely considered to be in the So Bad, It's Good category, Max Knight does have a few smarter moments. Notable items include the presence of "hackish," a nadsat-esque Future Slang that DXM and his minions make use of, and the nods toward Transhumanism — a concept which was not yet widely understood at the time the movie was made — that DXM's master plan entails.

Filmed in Australia, by the same production team that created Sir Arthur Conan Doyle's The Lost World in the late 1990s (which also starred Rachel Blakely).