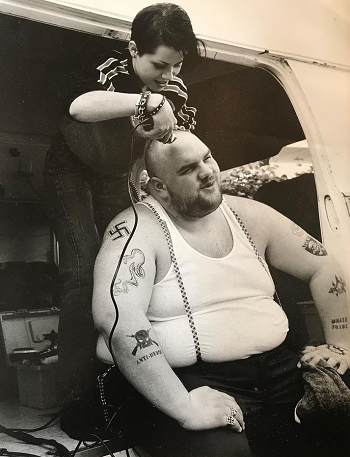 Jesse: Why is it the greatest champions of the white race always turn out to be the worst examples of it? You!
Klansman: Wh-wh-wh—
Jesse: Where the fuck is your chin!?
—Preacher #46, "Ku Klux Kretins"
Advertisement:

A character (often a villain) advocates the supremacy of group X over all others but is himself a very bad spokesman for the group (to the point of caricature in some cases). Such as a klansman who is also a stereotypical Basement-Dweller, yet still considers himself superior to the happy, successful African-American family next door.

Should the character succeed in his ideological goals becoming the norm, he is often the first victim of a karmic Original Position Fallacy. May lead to Stop Being Stereotypical, Pretender Diss, Contempt Crossfire, Cultural Cringe, or Your Approval Fills Me with Shame from other, more representative members of the group the character is part of.

Use of this trope may result in the Unfortunate Implications that Beauty Equals Goodness. Contrast Flawless Token, where a minority member is shown as superior to all other characters.

Not the opposite of Super Supremacist (a person with superpowers who thinks he should rule over the muggles), although they can overlap.