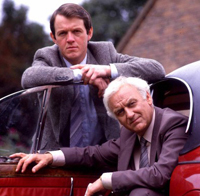 "Coded messages, murder — right up my street. It's not a bad way to start the day."
Advertisement:

Inspector Morse was a British Detective Drama based on a series of novels by Colin Dexter, which ran from 1987 to 2000. Set among the dreaming spires of Oxford, it starred John Thaw as the grumpy, brilliant and beer-loving Detective Chief Inspector "Inspector" Morse, and Kevin Whately as his cheerful Geordie sidekick Detective Sergeant Robbie Lewis. During the course of each episode, the pair would investigate a murder, which would often involve complex university politics, bright but emotional students and the opportunity for Morse to utilise his love of classical music, literature and cryptic crossword puzzles. Baddies are usually rich, arrogant, and well-connected.

Broadcast on ITV, the show show was immensely popular in Britain, and John Thaw's portrayal of Morse is generally considered one of British television's most iconic characters. Still repeated fairly frequently on ITV3 in Britain and PBS in the United States.

Sergeant Lewis later received his own spin-off in Lewis, joined by Laura Hobson (Clare Holman) as the only other regular returnee from this series. A prequel, Endeavour, set in the 60s and starring Shaun Evans as the young Detective Constable Morse, aired in 2012; it was renewed for a series airing from April 2013.

The show has also seen a 2010 theatre play adaption, Morse — House of Ghosts, where the role of Morse was played by Colin Baker. BBC later made an audio adaption of the play in 2017, this time with Neil Pearson in the role of Morse.