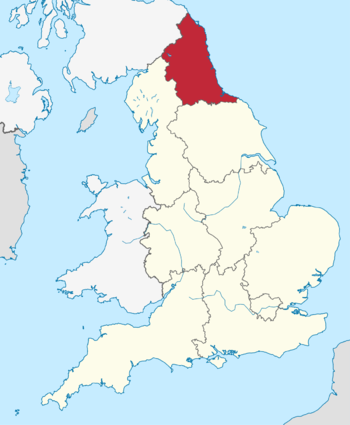 "Gonna make you dance, gonna make you sing
Those Geordie boys do anything"
—Gazza and Lindisfarne, Fog on the Tyne
Advertisement:

As well as being Oop North, North East England is the part of the country with its southern borders somewhere in North Yorkshire and its northern border at Scotland, reaching as far west as the border with Cumbria; equivalent to the ITV region served by Tyne Tees Television. Although North Eastern people are often referred to as 'Geordies', this isn't correct; while usage varies from person to person, it's generally safe to say that people not born or resident on Tyneside aren't Geordies. The Geordie dialect is unique, and can seem incomprehensible to Southerners - books have been written as guides. There's a section on Northern words on the British English page.

In history, the North East was fairly important to the Romans. Hadrian's Wall was built across its former northern border. After that, famous monks such as Cuthbert of Lindisfarne and Bede led many of the region's people. The English translation of the Lindisfarne Gospels

(a Latin manuscript of the first four books of the New Testament) was made there; it's said to be the oldest translation of the four books in the world. It was one of the favourite landing spots for the Vikings thanks to its North Sea coast and similar latitude to Viking territories. It also contains the first 'Washington', technically the town which gave the American capital its name.note George Washington's family were originally from the area and were named for the town, although they moved to Essex before going to America; Durham Cathedral has a memorial to a clergyman kinsman of Washington's which mentions that the family went on to greatness in lands unknown to him.

The North East played major roles in the shipbuilding and railway industries, one of its most famous residents being George Stephenson

who built the Rocket. It also proved valuable as a source of coal, and many of the 'pit villages' where miners and their families lived are now popular suburbs. Most of the big industries have closed since the war; especially the coal and steel industries. This results in a high unemployment rate.

Famous people from the North East:

Some stories set in the North East: