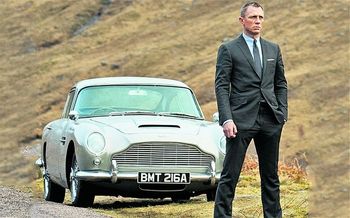 The name's Martin, Aston Martin.
Smith: What is this? Is this a classic car?
Bannon: Well, Smithy, some things get meaner as they get older if you know what I mean.
— The Gumball Rally
Advertisement:

The Hero of the story (and the villain) generally have aspects that set them apart from everyone else, which often includes a Cool Car, and there's a fairly good chance it will be an old classic model. Classics in modern settings tend to stand out, with those wide grills and huge fenders and fins on some models, making its driver more distinctive.

The car could establish the hero's character. When the trope is played straight, the car is usually a luxury or sports model; expressing glamour, independence, or courage. The trope can be Played for Laughs; if the character is more of a Butt-Monkey, they can have a dated economy car, or a car in chronically bad shape. Perhaps they are a Fan of the Past, or it indicates they have a more old-school style, or have old-fashioned views. Perhaps they might even come from that time. It might also indicate a degree of mechanical ability if the car is finicky and difficult to operate.

The car should be their primary mode of transportation, and be with them through most of his appearances. If it hasn't been with them from the start it will be something that they choose above all others.

The definition of a "classic car" has varied over time; usually 25 years back has been the limit between modern and classic cars. Therefore, the tropes is valid only if the car is at least 20 years older than the setting (i.e. if setting is in The '70s the classic car would be from the The '50s or The '40s). Period pieces where everyone is driving them would not count, nor would contemporary works where everyone is driving a classic anyway.

The point here is that it sets the hero apart.

The same principle applies to The Future; a car made around the Turn of the Millennium (or whenever the film was shot) might stand out as antique in a setting 20 Minutes into the Future; if most other people drive a Flying Car, or an otherwise Cool Car. In sci-fi or fantasy settings, anything that is clearly inspired by classic cars would also count. In some cases for Long-Runners, the hero's car may start off as being perfectly contemporary to his setting but end up becoming this trope over time as it doesn't change for the times.

The car can be anything from a Invincible Classic Car to The Alleged Car. Also likely to be The Precious, Precious Car if not What a Piece of Junk.

If the car is custom-designed for the character, it is a Theme Mobile. If the car is designed for a collective, it is the Signature Team Transport. Compare and contrast Matching Bad Guy Vehicles.