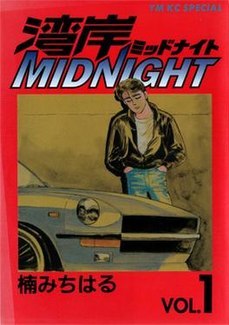 of the Shuto Expressway) is a manga series by Michiharu Kusunoki revolving around Tokyo's highway racing scene. The story primarily revolves around Akio Asakura, a high school student with a knack for attracting many women and taking them for rides in his car. One day, he is passed by a black Porsche 964, dubbed the "Blackbird" and driven by Combat Medic Tatsuya Shima, and attempts to race it, but quickly eats its dust. One day, Akio heads for the junkyard and finds an old blue Nissan S30 Fairlady Z (known as the Datsun 240Z in North America), discovering that it has been tuned from an old and outdated piece of junk into a souped-up racing monster known as the Devil Z (no, not that Big Bad from Transformers: Super-God Masterforce). Despite warnings about how the car is supposedly cursed, that all of its previous owners happen to share his full name, and that every one of those owners has died driving the car, he takes the dealer up on the offer and gives the Devil Z a spin, and discovered that the Z not only has unparalleled power, but seems to have a mind of its own, as he soon wipes out spectacularly trying to control it.

The series ran for 42 volumes, from 1990 to 2008, with a 26-episode anime adaptation that ran from 2007 to 2008. In addition, there is a 12-volume spinoff, Wangan Midnight: C1 Runner, that ran from 2009 to 2012. Furthermore, there is a collection of video game adaptations, including the popular Wangan Midnight Maximum Tune arcade game series, and a live-action film adaption released in 2009.

It now has an Oddly Named Sequel, Ginkai's Speed Star. Compare and contrast with Initial D and MF Ghost.

The anime and manga contains examples of: