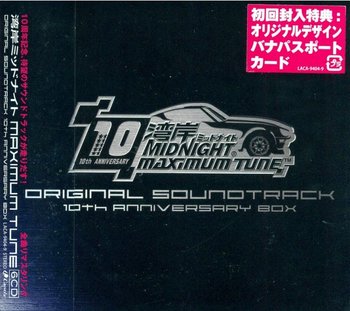 Ten years of passion from one man is wrapped up in that compilation box.note Maximum Tune 1 through 5 soundtracks included in it.
One of the Wangan Midnight franchise's best-known elements is its video game soundtracks. Composed mainly by Yuzo Koshiro, they've gone from stuff you'd hear in 70's and 80's chase scenes to trance that transports you to another world; many regard these soundtracks as Koshiro's best work since Streets of Rage.Wangan Midnight and Wangan Midnight R
Advertisement:

The first game and its Updated Re-release have a distinctly different style in their soundtrack, creating a racing atmosphere that may remind one of older street racing and car chase scenes.

Maximum Tune 6 seems to take on a more diverse music direction than past games, with Yuzo Koshiro breaking out of the trance mold to explore other genres: