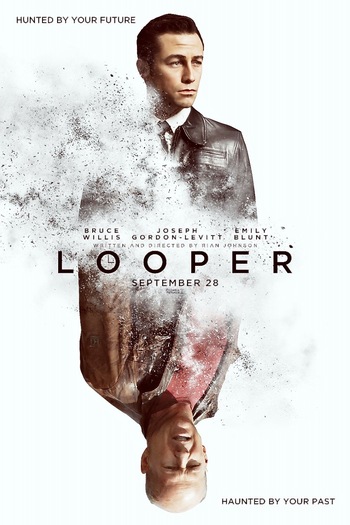 Joe: So do you know what's going to happen? You done all this already? As me?
Old Joe: I don't want to talk about time travel shit. Because if we talk about it, then we're gonna be here all day, drawing diagrams with straws.
Advertisement:

Looper is a 2012 American Science Fiction thriller film written and directed by Rian Johnson, in which Joseph Gordon-Levitt plays a man named Joseph Simmons, and Bruce Willis plays a future version of Joe.

The movie is set in the year 2044, thirty years before the invention of time travel. The technology is immediately outlawed, but the world's high-profile criminal syndicates begin putting it to practical use in secret. Because it is nearly impossible to discreetly dispose of a body in 2074 (due to advanced tracking and tagging technologies), the criminals send the target back in time, whereupon an assassin (called a "Looper") kills and disposes of the helpless victim before he technically ever existed.

Joe is one such Looper, and like all Loopers he has accepted the job knowing that if he's still alive in 2074, his employers will terminate his contract by sending his future self back to die at his own hands ("closing the loop"). The problem is that when his future self does appear, he does so of his own free will, unbound and ready to fight. Older Joe easily subdues Young Joe and embarks on his own agenda in the past - and he will not let anyone stand in his way.

The film, which also stars Paul Dano, Jeff Daniels, and Emily Blunt, is the third from writer/director Rian Johnson, as well as looperJohnson's second collaboration with Levitt. Watch the trailer here