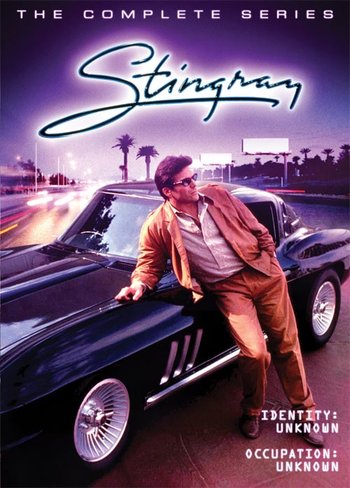 "The world runs on money. Everybody walks around with this invisible number in their heads. You hit the figure close enough, the penny drops, you own the man. In Hong Kong you can buy a murder for five bucks. In New York City a sloppy job runs you five hundred. A neat, clean, professional hit, upwards of ten grand. On skid row they'll kill you for your shoes. I take money out of the equation. My hands don't sweat, because I'm never at the pay window."
—Ray
Advertisement:

A television series created by Stephen J. Cannell that ran for two seasons from 1985 to 1987.

Ray (played by Nick Mancuso) a man with a mysterious past would help a client with their problem. They would approach him by answering an ad that ran every Friday in the New York Times offering a "'65 black Stingray for Barter Only". Ray would not take money from his clients but demand a favor that he would eventually collect.

No relation to the 1964 puppet show of the same name (about a special naval agency and evil fish-men) created by Gerry and Sylvia Anderson of Thunderbirds fame (interestingly, the title was not changed when the series was screened on ITV in the UK - clearly no one could ever get the two confused!). Nor to the Corvette Summer clone from 1978. Nor to the creature that ended the life of Steve Irwin.