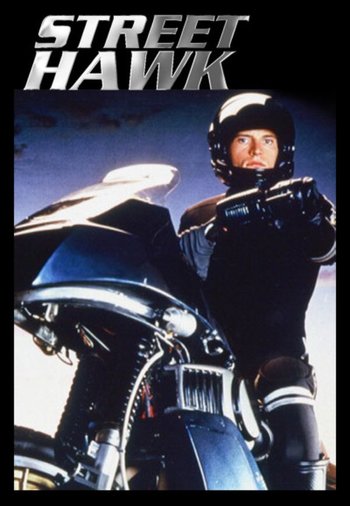 "This is Jesse Mach, an ex-motorcycle cop injured in the line of duty, now a police troubleshooter. He's been recruited for a top-secret government mission to ride Street Hawk, an all-terrain attack motorcycle designed to fight urban crime, capable of incredible speeds up to three hundred miles an hour...and immense firepower. Only one man, federal agent Norman Tuttle, knows Jesse Mach's true identity...
Advertisement:
The man... the Machine... Street Hawk."

A fairly trope-heavy 1985 series centered around Jesse Mach (played by Rex Smith), a police troubleshooter enlisted by the government to fight crime undercover on the superbike Street Hawk. Notable for its soundtrack by Tangerine Dream. Has a kickass opening theme song

A single season of thirteen episodes was made. A lot of interesting information on the series can be found at the Street Hawk Online