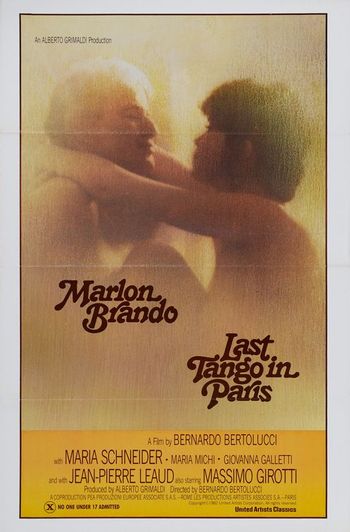 Ultimo Tango a Parigi (Last Tango in Paris) is a 1972 Italian drama film (though with French and English dialogue) directed by Bernardo Bertolucci and starring Marlon Brando and Maria Schneider.

Paul (Brando), a 45-year old American who lives and owns a hotel abroad in Paris, is mourning the suicide of his wife when he meets Parisian woman Jeanne (Schneider) whilst apartment hunting. Jeanne herself is engaged to a film director, though Paul does not know this initially. The two feel lonely and marginalized, so they begin a torrid affair, of which the rules, as set by Paul, are that they do not tell each other any personal details about themselves; not even their names. As time goes by, Paul becomes possessive and starts to act abusively towards Jeanne; in one infamous scene he anally rapes her using butter as lubricant. Things go downhill from there.

When released, the film's groundbreaking subject matter caused a media frenzy and Moral Guardian outrage, despite some glowing critical reception and Academy Award nominations for Brando and Bertolucci. It is regarded nowadays as one of the best European films and best arthouse films ever made. It could be considered the progenitor of the Euroshlock genre. It is an obvious influence on the films of Catherine Breillat (who herself has a small appearance in the film), specifically Romance and Anatomy of Hell, both of which would help to revive the Euroshlock genre in the 2000s.