Literature / To Say Nothing of the Dog 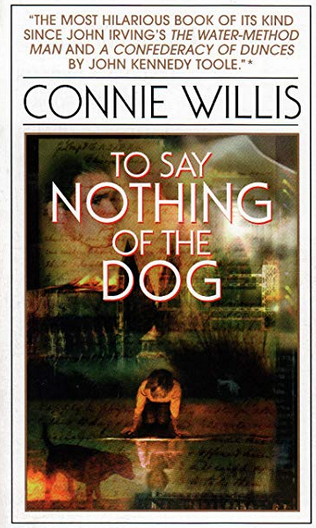 To Say Nothing of the Dog is a 1997 novel by Connie Willis. The story is set in Oxford, England, about 60 years into the future, after Time Travel has not only been invented, but pretty much everyone except historians has lost interest in it. This is mainly because it turns out that you can't bring things from the past to the future, or at least, you aren't supposed to be able to. Most of the history of this period and rules of time travel are laid out in Willis' earlier novel Doomsday Book, which takes place in the same universe.

In To Say Nothing of the Dog, the History Department of Balliol, Oxford University, has been thrown into chaos by the pet project of a rich donor: to rebuild a cathedral that was destroyed during World War II, exactly as it was at the moment it was bombed. Ned Henry is charged with finding out what happened to the Bishop's Bird Stump (a bird stump, incidentally, is a kind of flower vase; this particular bird stump is cast iron, and extremely Victorian), and is having some unexpected difficulty with the task. Then another historian, Verity Kindle, accidentally brings a cat from Victorian England to the present. Ned and Verity go back to Victorian England to try to sort out the problems caused by the missing cat, before history begins to change. And the bird stump is still missing. . .

The novel could be this site's designated mystery; the two lead characters are extremely Genre Savvy, know their tropes, know when they encounter one, and still manage to wind up blindsided by events. Furthermore, the novel makes repeated references to Jerome K. Jerome's Victorian comic classic Three Men in a Boat; the novel takes its title from that one's subtitle.