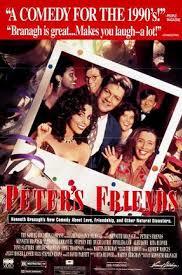 Peter's Friends is a 1992 comedy-drama film, directed by Kenneth Branagh.

Six college friends, members of a theatrical troupe, go their separate ways after graduating from Cambridge in 1983. Ten years later, one of them, Peter Morton (Stephen Fry) inherits a vast estate and mansion on the death of his father. Peter gets the idea to invite all his old school friends for a New Year's Eve celebration to remember old times. His five friends from the troupe are:

Other characters include Vera, the long-serving housekeeper at the estate who may be looking for a new job now that Peter owns the place, and Richard Briers as Peter's father.